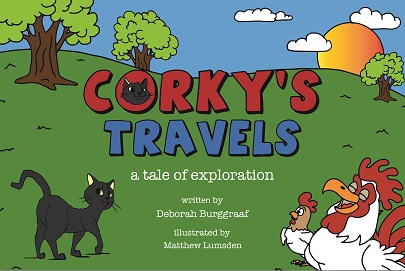 CORKY'S TRAVELS has been released!

Ms. Burggraaf has once again teamed up with two-time, FAPA Award Winning Illustrator, Matt Lumsden, a graphic artist in Boca Raton, Florida to create an everlasting love story between a stray black cat, Corky, and Jim, a fellow living alone looking for companionship.

The central characters are Jim, a man living alone in his cottage, and CORKY, a stray, black cat struggling to survive on his own at only two weeks old.

CORKY'S TRAVELS tells the story about Jim, a young man who rescues a stray black cat being tossed around by chickens and a rooster behind a wired fence. Jim runs over to save “Corky,” his tail now bent from his experience while landing in a dirt trench. The two bond instantly, as Jim learns how to feed Corky, now making his home a safe place for Corky to call his own.

The two travel together over the years, by truck and by airplane, yet always long to return to their cozy cottage. One evening at sunset, Corky goes out to explore on his own. Jim reaches for a flashlight in search of his friend in the darkness yet returns home with only memories.

MATTHEW LUMSDEN, FAPA Award-winning Illustrator and graphic design artist takes his readers to Jim’s welcoming cottage, filled with a yard full of White Birch trees and fluttering Monarch butterflies. Mr. Lumsden captures Corky and Jim’s special moments, as the two travel together on a flight to the east coast, as well as make the trek across the states in a bouncy truck ride. Mr. Lumsden shows the love between the two characters with profound beauty to behold, as well as illustrates the importance of holding onto hope for those you love dearly.

Parents, Educators and children will also welcome the lessons available on: www.dburgg.com