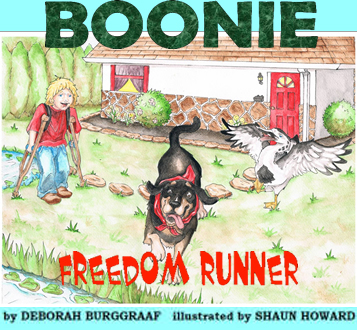 Is there really a 'Boonie" dog?
First, I now have a Black and Tan Coonhound Dog and his name really is, Boonie! Actually, Boonie was a rescued, hurricane dog that I found out in the Acreage area in Florida. He was roaming around in the heavy rains and high winds of Hurricane Frances. I hopped into the car and drove across the vacant lot. With flashlights and dog biscuits in hand, I attempted to rescue him and coax him into the car.

I remember how wet and thin he was. Willingly, he jumped into the back seat and I drove him to his new home. He continued to eat and drink that night, and seemed happy to have been rescued during this wild tempest. Following this, Boonie went to the local Veteranian and was giving a 'doggie' physical. To my amazement, Boonie had a chip located in his thick coat!

Of course, I wanted the owner called. After the doctor made several attempts to reach the previous owner only to hear that the telephone had been disconnected, she confirmed that in fact, I now was the new owner of this Black and Tan Coonhound Dog.

Regarding the "chip," that was full of information, his previous name was, "Goofy," so when I called him by his new name, "Boonie" his head immediately turned and he looked toward me because of the similarity in the sounds.

And so, Boonie was brought into a warm, loving home and became part of our family.

Where did the story first come about?
BOONIE, FREEDOM RUNNER was first only a thought about a story, as is with all stories. After I had read an article about a middle-aged woman who was unable to walk and bound in a wheelchair, I learned that she owned a Black and Tan Coonhound Dog, whom she depended on daily. I remember how the article expressed the unconditional dedication of her dog, just like Boonie, with his playfulness and genuine loyalty to the owner.

After reading this article, I developed a story using a, "Planning Web," where a little boy could not walk and was dependent on his crutches. I thought that my new character, Lil' Timmy could rely on Boonie to take his first steps to freedom. I knew that Boonie would stay by his side. One day, Timmy did attempt to walk without his crutches, and his life was forever changed.

Dapper, the duck, in BOONIE, FREEDOM RUNNER, was a duck that I had spotted in a lake up in Orlando. I thought that Dapper would make a delightful addition to the book. His neck had salt and pepper speckles right up to his eyes. I watched him dip down into the water searching for his next catch of fish. I photographed him and I knew that I wanted to include him as one of the friends of Boonie and Timmy in the story.
Tilt is just another http://www.bellayoscura.com name for emotional instability in online poker and its effects can be massively destructive to your bottom line.


You said that you use a "Planning Web" designed and written before you stated to write BOONIE, FREEDOM RUNNER. Once this is completed, how long did it take you to write the book?
After the pre-writing, or writing out the, Planning Web, BOONIE, FREEDOM RUNNER was written over one weekend. As I remember, it was most of a Saturday and part of a Sunday morning before I printed my first copy. It sounds like it was a quick process, however, my "Planning Web" lays out all of the literary elements that make a good story: conflict, rising action, climax, falling action, and resolution.

As you continue to write children's picture books, what gives you the greatest joy when writing?
My greatest joy when writing books for children is first when I hit the print button and actually hold the first draft of the story. Second, it is an outstanding feeling when a child holds one of my books and is reading it. This is what writing is all about! I also like to read to the children.

Now that BOONIE, FREEDOM RUNNER has been released, what are you writing now?
Currently, SASHSA'S BIRTHDAY PARTY is being illustrated. This doggie Birthday Party book is scheduled to be released in the Spring of 2011. It is about a Chihuahua, Sasha, who invites the neighborhood doggies to her annual backyard birthday party.

Additionally, the second in a series, COOKA GOES TO SCHOOL will follow in the Fall of 2011. Our dear, main character in the first book, COOKA, THE BIRD WITHOUT WINGS, goes to school one day in the briefcase of Mrs. Rodriguez from Boca Raton.

Cooka actually teaches the students Test-taking Skills when she visits the classroom for the first time. After teaching the students, Cooka hops on the big, yellow school bus with Miguel, Kai-ying and Jawon and has the ride of her life next to the bus driver, Mr. Finley. And once more, Cooka is happy to have discovered new things and realizes that anything is possible!

How do you get the ideas for all of your picture books?
I remain aware of my surroundings and I have realized that the older I get, the more I listen. More often, I piece together many things that I hear or observe, and then I put those thoughts together into a story that works.

When you are not writing, what is your favorite thing to do?
Right now, I am experiencing the joy of fishing! I try to fish every Saturday morning. It is so lovely to be outdoors with Nature at her best! I love the water, I love the wait for the catch and I can think and clear my mind. Or, I can even 'write' in my thoughts, as I watch the blue and green waters turn to white caps and rush in along the coast.

I simply get such pleasure hanging out with my fishing buddies and casting my line across the Atlantic Ocean. So yes, there will probably be an upcoming 'fishing story!" All of my books are available for purchase here at dburgg.com or at www.Amazon.com